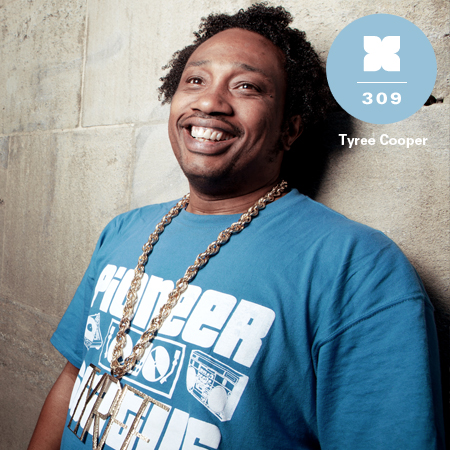 The history of Chicago house music is full of names that are often hailed as “legends,” but only a handful of Windy City artists have truly had the same kind of impact as Tyree Cooper. His time as one of house music’s movers and shakers actually traces back to the mid ’80s, but it was Cooper’s role as one of the innovators of hip-house in the late ’80s and early ’90s that catapulted him to another level entirely. By combining bits of acid and piano house with dancefloor-friendly rhymes, Cooper’s flurry of tunes during that era helped bring both house and hip-hop to new audiences. And though the popularity of hip-house faded as the ’90s wore on, Cooper didn’t disappear; he’s continued making records for the past two decades, exploring various facets of house music in the process. Now splitting his time between Chicago and Berlin, Cooper is still a regular fixture behind the decks, so we got in touch and enlisted him to put together an exclusive mix for the XLR8R podcast series. Cooper is often celebrated for his raw, street-ready sounds, and while there are flashes of that here, the podcast also shows how he’s refined his tastes over the years; elements of disco and soulful, big-room house also populate the mix. As one might expect, Cooper has also enlisted a few of his own tunes, including a selection from Jack the Box, his collaborative project with Bobby Starrr that has a full-length album scheduled to drop in October. Surprisingly, the mix also features several bits of Cooper himself—on the mic. And though he’s seemingly put his rapping days behind him, his gregarious toasting shows that he’s still primarily concerned with rocking the party. It’s hard to find fault with that.