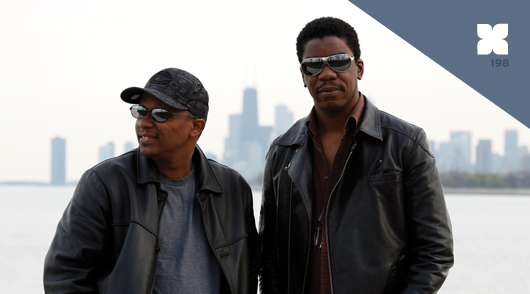 After re-emerging from the Chicago house ether last year with the Rush Hour reissue of its seminal self-titled album from 1989, the duo of Merwyn Sanders and Eric Lewis (a.k.a. Virgo Four) has seen its music and, perhaps more importantly, its influence, finally given its proper due. Last month, the pair continued to build upon that legacy with the release of Resurrection, a massive batch of previously unheard and unreleased material from 1984 to 1990. Here at XLR8R, we’ve elected to keep the celebration going by inviting Virgo Four to put together an exclusive mix for our podcast series, and the fellas have more than delivered, putting together a DJ session that pulls heavily from the salad days of Chicago house music. There are flat-out classics here, not to mention plenty of acid lines, stripped-down drum-machine beats, and soulful vocal snippets. While it’s impossible to truly re-experience that signature Chicago sound in 2011—at least in the same context as Sanders and Lewis once did—mixes like this one do help recreate some of the Midwestern magic that gave birth to Virgo Four and its old-school house brethren.