On what’s sure to be one of the best party albums of the year, the […] 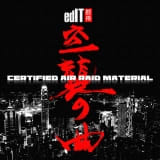 On what’s sure to be one of the best party albums of the year, the friendly face of L.A.’s Glitch Mob, Edward “edIT” Ma, crashes the party, pulls the fire alarm, passes out champagne, and lights a cherry bomb in the toilet. He actually shakes off much of the “glitch” from his 2004 Planet Mu debut in favor of good-times crunk, complete with rabble-rousers The Grouch, Busdriver, TTC, Abstract Rude, and D-Styles. Some of the album feels like heavily stuttered dancehall (“Straight Heat”), some of it rocks hard (check the solo on “Crunk de Gaulle”), and the “Artsy Remix” is still funny after a dozen listens. edIT is a deadly charmer whose album withstands repeated partying.