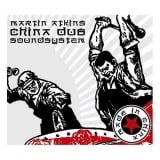 Martin Atkins, ex-Public Image Ltd. drummer and industrial vet, is a tourist anxious to show off his souvenirs from Beijing. For Made in China, he recorded Chinese rappers, DJs, traditional string musicians, and Tibetan singers, and alongside them he thwacks rivet-head beats. The result teeters between clever ethnodelica and novelty for Westerners’ amusement. Aktins has a keen ear for the ethereal: string chords levitate on “Mostly Hulusi,” and fluttering hand-drum beats quadruple on “Hand Drum.” It’s tough to determine if Aktins’ fusion of Western and Eastern sounds is a proper model for future pop in both cultures. But it’s a healthy reminder that no government can silence a nation’s music.