A master of live electronics celebrates a set of remixes from his seminal debut album. 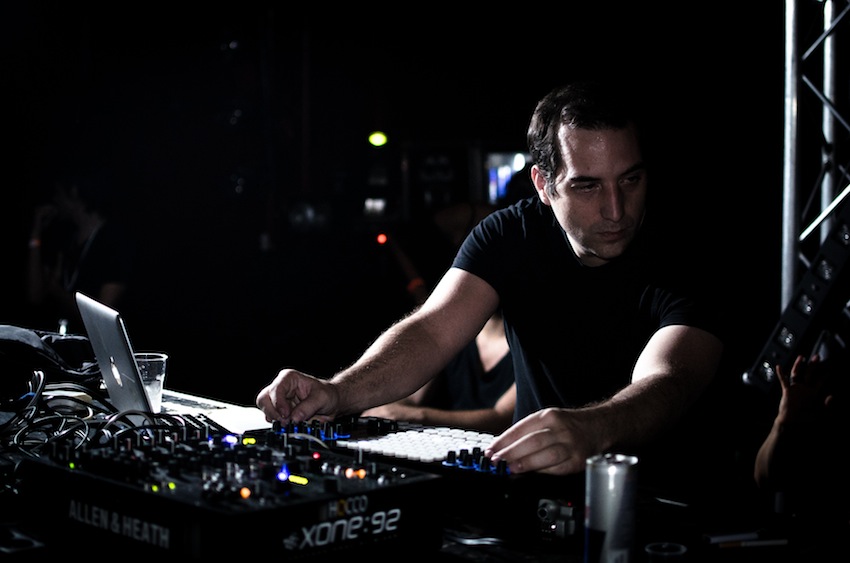 A master of live electronics celebrates a set of remixes from his seminal debut album.

Canadian-born Marc Houle is not a DJ; he is widely acclaimed electronic musician who produces his own music and performs it live, beat for beat, drum for drum. Artists today can spend their whole careers striving for originality in what is a continually saturating market, but this is exactly what Houle has achieved by combining the house sounds of Detroit and Chicago to create his own unique blend of synth-heavy minimalist techno.
It’s a decade on from his debut LP, 2004’s Restore, on Richie Hawtin’s Minus label—and now Houle’s givin his seminal release a stunning makeover called Restored, calling on some of the leading names in modern techno for contemporary remixes, including Danny Daze, Harvard Bass, Julian Jeweil, Joris Voorn, M.A.N.D.Y., Popof and Houle himself. On the verge of the U.S leg of his Restored tour, Houle kindly agreed to partake in XLR8R’s latest edition of 20 Questions.

Where in the world are you right now?
I’m back home in Berlin, enjoying the grey sky and warm studio.

What were your reasons for moving to Berlin in 2008? What’s the best/worst thing about the city and how does it compare to Windsor, Ontario?
For years I was coming to Berlin and staying with friends so I could play shows around Europe before returning back to Canada. Europe was really the only place I could actually make a living playing my music. While I was visiting, I learned how amazing this city really is and slowly realized that it was the only place I could live, so I moved my studio over and have loved it ever since. Growing up in Windsor was so good because it was five minutes to drive to downtown Detroit where all the crazy parties were in the ’90s. Without growing up there and experiencing the Detroit techno scene, I would not be doing what I do now.

Where is your favorite place in the world to visit?
As unglamorous as it may sound, I love going back home to Windsor to see my family, for obvious reasons. Besides that, I guess Japan—its so fun out there and the food is amazing, and the people I know are very special to me. Argentina and Colombia are probably the most fun to play because they just go insane.

What do you miss most when you are on the road, and why?
A lot of my peers are able to sit at a laptop, open up Ableton and make tracks on the road. I’ve tried over the years and I just can’t seem to do that. Maybe it’s the lack of gear. Maybe it’s ’cause I gotta use headphones…but I really miss making music on the road which is a good thing because when I do come back home, I go crazy.

Does music production/performing now feel more like a job rather than just a hobby?
When I was younger, I was really into graphic design and turned that into my career. I began to loathe it to the point where I don’t really care about fonts or open up Photoshop anymore. I always made sure that the same thing wouldn’t happen to music.
I’ve been making electronic music for about 30 years now. I’ve always known that it’s something I’ve needed to do, but I never expected or even thought about doing this for a living. It’s a passion of mine first and career second. To me, keeping it fun, challenging and exciting out trumps everything else.
A big advantage I have is that as a live act, I can tour around and play and party then come back and balance out things by working in the studio for a while. The balance works well and it keeps everything fresh.

Did you first envisage yourself more as a music producer or a live artist?
I’m definitely more of a producer. I could live without touring but I couldn’t live without creating.

How have your production techniques evolved over time?
They haven’t, really. I still have most of the same gear I started with and I still use Cubase. So the way I do things isn’t much different—but obviously, after all this time, my ears have gotten better at making things sound the way I want. I listen to my old stuff sometimes and laugh about how poorly it was mixed or how muddy things sound. The most important for me is being comfortable enough where I don’t have to think too much in the studio; I can just play music and have fun creating.

What was the first record you ever bought?
Maybe Iron Maiden—Live after Death? I remember sitting at the mall and opening it up while sitting at a fountain. It was so fun because it had a giant book inside with loads of pictures. It’s so vivid, even today.

What is your favorite non-electronic album?
Maybe the Spoons from Canada—Arias & Symphonies. There are synths in the band but it’s more rock I suppose. Van Halen’s 1984 is also pretty fun. Oh, and Black Sabbath—Paranoid. Sianspheric’s Somnium is amazing, too

What is the best DJ/Live set you’ve ever seen?
Probably [Richie] Hawtin in Detroit at one of the Plastikman warehouse parties back in the ’90s. It’s all a blur but I remember those parties being remarkably good and looonnnngggggg.

Why the longstanding preference for live sets over DJing? What do you feel it offers that a DJ set does not?
The good part about playing live is that you are playing songs that you know better than anything else. No DJ could know every aspect of my track like I do so I can work them and play them like nobody else can. It’s unique to me.
The bad part is that a DJ can take a track from anywhere and play it so his arsenal is much bigger. I could never DJ. It would feel weird for me to be on stage playing someone else’s song.

“My goal isn’t to get praised for playing original tracks; it’s to make people dance.”

Do you ever feel that people fail to properly grasp the concept of and skill involved in performing a live set?
Sure. When I’m up there, I’m so busy counting in my head, planning, thinking—and people are used to DJs who can put a track on and have a drink and talk to friends. Most people on the dancefloor have no clue what a live act is and probably just think I’m Djing. But that’s all fine to me. My goal isn’t to get praised for playing original tracks; it’s to make people dance. So that’s all I ever care about—doing my job.

Does the current state of the electronic music scene excite you, and why/why not?
Ha, ha—tough question. Without sounding like an old jaded curmudgeon…lately I’ve been watching big DJs play the same crappy music because it’s easy and it works. It sounds like they’re playing one loop for hours and hours and every 16 bars playing a sound effect and cutting out the bass before bringing it back in for the crowd to go “woo.” I call it Buji tech because it just goes “buji buji buji buji.” There’s always sub-bass, usually on the 3, 7,1 1 and 15 playing along a shuffle beat. It has no soul to it.

How has your attitude towards music production and performing changed over the years?

Not really, no. I’ve gotten better at cleaning out all the mud though. I’ve come to realize that every sound I put in usually needs only a small portion of the overall mix so I’m always removing unwanted frequencies to make room for other instruments and to let more space come in. My tracks don’t sound as muddy as they used to.
As for performing, I think I’ve gotten much better at being flexible and being able to customize my show on the fly. I can tailor to what the people on the dancefloor need to hear, and not what I’ve prepared ahead of time. I still have fun up there though even if I may look deep in concentrated thought.

How are your preparations coming along for your Restored tour? Does touring continue excite you as much as it did or has it just become part of the job?
The only time I get exhausted from touring is when it’s not a weekend thing but an extended tour that takes me away from my home life and studio too long. Otherwise I look forward to the shows and the parties and all the great like-minded people along the way. Also, I’m always throwing new gear in the live show mix, so it’s exciting to take it on the road and test it.

What’s a typical day like for you leading up to a performance?
Eat, sleep, play, after-hours, plane, repeat.

What were your motivations behind the Restored remixes album?
When I realized that 10 years was coming up on my first album, I wanted to do something different than just re-releasing a remastered edition or including some bonus tracks or something. I thought it would be interesting to get a fresh take on an old album and put some new life into something that many people never heard. I’ve always loved that album because it was before all the craziness started, and it was just me as an artist before ever setting foot on stage.

How would you describe your sound has evolved in the 10 years since the original Restore LP on Minus?
I’ve had a lot of phases in my time: guitars, bass guitars, bleeps, dark, slow, techno, house. It’s not so much that I’m headed in a certain direction, but more like my circle is getting bigger and I’m trying more things that I didn’t do before. I still make tracks that sound like the ones I did in the ’90s, but I’m also making some brand new sounding material. I don’t have any pressure in the studio so it’s just whatever comes out of the machines and my brain at the time.

What inspired you to start the Items & Things imprint as a Minus sub-label with Magda and Troy Pierce in 2011? What’s your vision for the label?
Originally, we would be traveling around and come across some great weird fun music that deserved to be released. At the time we were on Minus and the music didn’t really fit that sound or aesthetic. So we started the label out of a necessity to bring some cool tracks to light. Since leaving it’s become more of a platform for all our music, along with other special things we still find. Today it’s very different. With us three not meeting up as much as we would like to, it’s become less of a focus—but that’s something I want to change, of course. It’s very special to me regardless of how busy I am or how little money labels make these days.

What’s the first thing you’ll do after answering these questions?
Continue recording new tracks, of course.