Light conversation with one of LA's brightest talents. 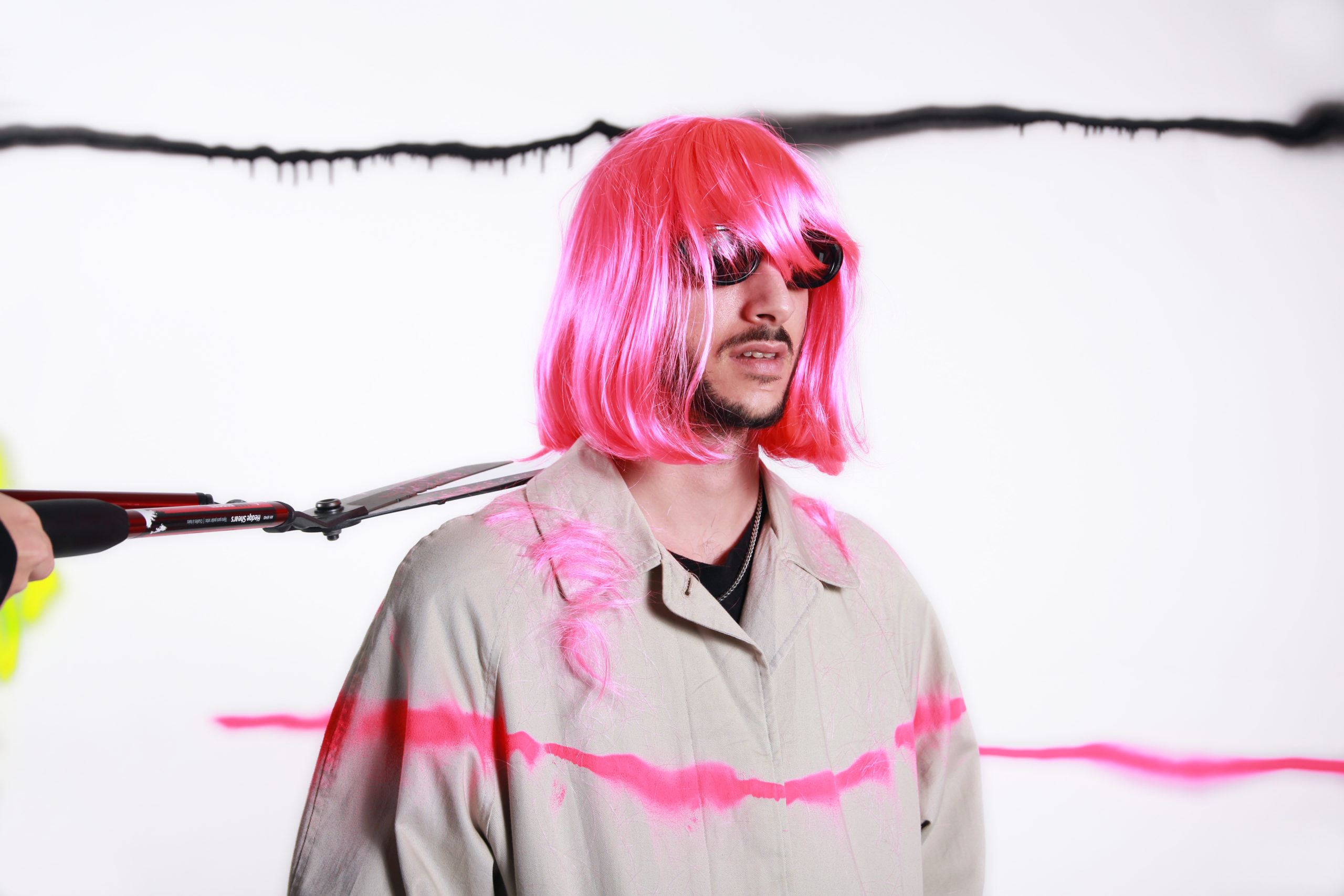 Light conversation with one of LA's brightest talents.

It’s been a wild few years for Henry Laufer, better known as Shlohmo, and formerly Henry From Outer Space. The LA producer is one of the most exciting names in a new generation of artists raised on the West Coast and the first of these to gain widespread international recognition. Since dropping his last album, 2015’s Dark Red, he’s teamed up with Post Malone and Chance the Rapper among other names of contemporary pop royalty, not to mention touring the world, from Australia to Europe and the Americas.

It all started with 2009’s Shlo-Fi, a debut EP inspired by Los Angeles’ instrumental hip-hop-and beat-centric music scene, at the heart of which lay now legendary club night Low End Theory and its ever-growing list of alumni that includes TOKiMONSTA, Samiyam, Flying Lotus, and Daedelus. Important, too, has been Wedidit, a blog, party collective, and now label founded alongside friends Juj, Joseph, Groundislava, D33J, Dr. Blount, and more.  “We’re all just friends who grew up together,” Laufer has explained. “We just wanted a place where we could all post our music/art and share it with each other.” Laufer and his crew began playing parties all across the city before moving into production, spinning and sharing trap, warped house, R&B, and hip-hop.

The End, Laufer’s latest album, a hark back to these early days that aims to sonically document “the end of the world,” lands on Wedidit and Friends Of Friends Music on March 22. It’s the latest addition to a discography that also includes collaborations with Joji, Yung Lean, Lil Yachty, Banks, and also Jeremih, after impressing with an unofficial remix of his track “Fuck U All the Time” back in 2012. Laufer has also completed his debut film score for Share, a 2019 drama that had its world premiere at Sundance on January 25. If his more recent work is anything to go by, we should expect a collective of delicately crafted productions with crackling hip-hop beats and a warm lo-fi aesthetic.

To learn more about it, and what’s been going on the past few years, XLR8R dialed Laufer in for a sit-down chat in Los Angeles one afternoon.

Finishing the album. Making videos. Just finished scoring a film. Executive producing a band’s record, and working on a bunch of other shit.

Sitting on my couch. My dog sleeping next to me. Apple TV screen saver going in my peripheral.

03. You began producing music early, but when did you realize you had a knack for it?

I think when I was 19 or 20, when I started releasing stuff. It was always just a hobby up until that point, just making dumb sample beats on GarageBand and then Reason, learning what to do. I think it took me a few years of doing that to feel like I was versed enough to know how to make songs in general, and to know what I wanted to say. I got Ableton when I was 18 and that really opened a lot of creative doors for me, resampling myself playing instruments and using field recordings in place of drums, really making everything from scratch. When I started compiling the things I made into mixtapes and posting them on Myspace was when I noticed people starting to pay attention.

04. What’s the story behind the name, and why the change from Henry From Outer Space?

Lol! That name was kind of a joke, I was like right out of high school and it was just funny to me. I changed it because I didn’t want the music to be a gimmick. I wanted the name to be ambiguous, with nothing preconceived attached. I had always wanted to name a band shlohmo, but that never happened so I just used it for myself.

05. You’ve been busy with collaborations since your last album. What’s the most valuable thing you’ve learned from working with Post Malone, Chance the Rapper, Banks, etc.?

I usually make music alone so it was important to learn how to be vocal and communicate ideas. I was used to just thinking of something and doing it without having to talk about it. When I’m working with someone I never want to make something that already sounds like something they’d do or like I’m just trying to blend in with their other production work. I want a vocalist to sound their best or like my favorite version of what they do, and for the production to still sound like me at the same time. It’s about being able to adjust to someone’s style and needs while still keeping your sound, trying to find that balance.

“I still want everything to sound like it was found deep in the dirt somewhere 1000 years from now.”

06. Dark Red and Bad Vibes were different aesthetically. In what ways does the new album capture your artistic maturation?

To me, it’s still similar in what I’m trying to capture but it’s just executed with more experience and a better idea of how I want to say things. It’s still raw and imperfect but maybe just a more refined and realized version of that. I still want everything to sound like it was found deep in the dirt somewhere 1,000 years from now. Like a forsaken human soundtrack of earth decay.

07. It all started organically, with a bunch of friends making music. How do you try to protect this with increasing demand for your work?

My albums have always been about what I make when I’m alone and not about what people want. I just have to always remember that. When I’m making stuff I just try to forget about everything. If I start thinking about anything else I get thrown off and it doesn’t come out right. It’s like a weird form of meditation. It’s easy to get into a sort of trance state while making something you care about so it’s usually not too difficult to forget about the rest of the world in those moments.

08. You recently composed the score for A24 film Share. How did you find this process, and how was the music informed by the on-screen narrative?

It was my first time scoring anything and it was a great experience. Definitely a different process to anything I’m used to. The approach is a lot more subtle than it is when making records. The film, directed by Pippa Bianco, is about a high school girl who is sent a disturbing video of herself passed out at a party that she can’t remember. She then tries to figure out what actually happened and how to cope with the fallout at school and at home. You really get to see the blame and the alienation that comes with these kinds of circumstances in our current culture. It’s really heavy and emotionally intense. To try and match the feeling, I focused a lot on minimal composition that could still be dynamic at the same time to fit the movements of each scene. Sorrowful and drawling while trying to keep it subtle and not too emotionally directive, to let the picture speak.

09. What’s your production process like, and how has this changed as you’ve matured as an artist?

It’s stayed relatively similar since Bad Vibes actually. Space out and try and find a sound or melody I connect with and build around that. I still use guitar and record things to cassette. I don’t like things to sound polished so I haven’t upgraded much of my gear.

10. You’ve been on the road a lot. How do you find the touring life, and can you tell us a funny story?

It took a while to get used to but I love it now. It’s super lucky to be able to go to these places in the world for music. Being able to meet people from all over who fuck with my music is a good reminder of the reach we have as artists.

There are too many dumb stories to pick from and I have such a bad memory. One that stands out though is when I was in Berlin playing with my band at this festival and we were playing in this big warehouse. We were like three songs in and started playing “Emerge from Smoke,” and all the sound cut off suddenly and the lights came on. This loud voice came on the speakers but it was in German so I had no idea what the fuck was going on. People started like running to the door. A bunch of dudes came on stage and tried to get us off stage and then someone yelled in English that there was a fire on the second floor of the warehouse and everyone needed to get out. They made us leave all our gear and evacuate. Luckily they got it under control and no one got hurt and our gear was safe. But I didn’t get to finish my set, and for the rest of the festival kids were coming up to me all mad like why the fuck didn’t I finish my set on another stage, like I could somehow make that happen!

11. What’s been your favorite city that you’ve visited?

Damn, that’s really hard to say. Tokyo, Mexico City, London, and Berlin are a few of my favorite places. They’re all so full of their own culture of music and art and fashion that are each so specific and different from the US’ ideals, it’s exciting to just walk around in any of those places and take everything in. Japanese and Mexican foods are also some of my favorite things so I’m always particularly excited to go to either of those countries and eat everything.

12. Which artists are really inspiring you at the moment?

13. If you could wake up tomorrow having gained any one musical quality, what would it be?

14. Do you read reviews of your music?

15. What would constitute a perfect off-day for you?

Getting three coffees and eating a really good bagel and lox, making music with no distractions for a few hours, getting a fire sandwich, playing video games with friends, and then going to a house party with everybody.

The weather, the food. It’s an easy place to love but it’s also easy to have a bad time here if you’re just visiting. Growing up here was great because you can really make your own world here. It’s very much what you make it. What I don’t love is living amongst the “industry” a lot of the time. People get caught up in superficial shit way more so than anywhere else, I feel like. It can get pretty tiring being around that and you start to forget the rest of the world doesn’t give a shit about what these people are talking about. I feel like you have to consciously avoid it now to do your own thing. And the traffic fucking sucks.

17. What’s the last thing that made you laugh and why?

Probably this photo of Michael Jordan on a jet ski. He’s wearing a helmet and smoking a big cigar.

I haven’t read a book in so long.

19. Who is the last person you texted, and what was it about?

20. What will do after answering these questions?

Drink water and go to sleep.