Daniel Brandt, Jan Brauer, and Paul Frick reveal the secrets behind their work. 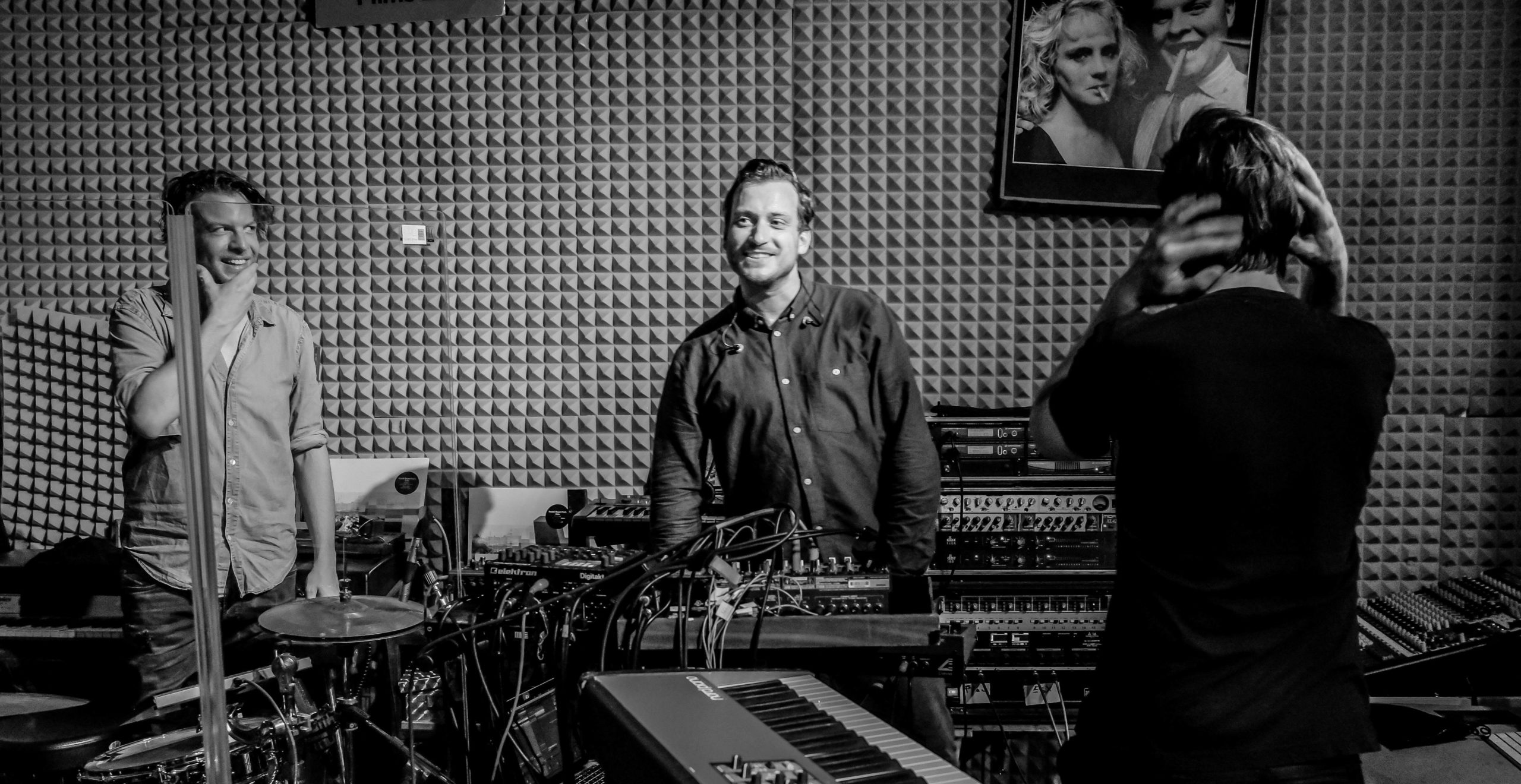 Daniel Brandt, Jan Brauer, and Paul Frick reveal the secrets behind their work.

When Brandt Brauer Frick debuted on Tartelet Records in 2009, reimagining propulsive techno with acoustic instruments, the world of DJs performing with orchestras and pianists headlining festivals was a long way away. Inspired by Berlin’s classical history and its dank dancefloors, Daniel Brandt, Jan Brauer, and Paul Frick’s beats owed as much to minimal masters Steve Reich and Philip Glass as they did the minimal techno of Ricardo Villalobos and the Perlon label. Their debut album, You Make Me Real, blended the highbrow music of concert halls with the euphoric abandon of club music, and in doing so helped to pioneer the contemporary classical renaissance in pop music.

2011’s Mr Machine then saw this album reworked in a novel way: instead of commissioning an electronic producer, the trio opted to rearrange it for the newly founded 10-piece ensemble, using brass and string instruments, as well as harp, piano, and percussion. It preceded 2013’s Miami, a concept record that drew on noir funk and spooky synths, and also 2016’s Joy, where the trio morphed into a post-punk band with the help of Canadian poet Beaver Sheppard.

Since then, the three musicians have been off working on other projects—Brandt has released two solo albums on Erased Tapes, Brauer has been composing music for various media, and Frick put out his first solo album, Second Yard Botanicals, in 2018. This year, however, Brandt Brauer Frick have come full circle, returning with Echo, an album that “echoes our 10 years of existence,” Brauer explains.

Recorded between their own and the Red Bull studios in Berlin, the 11-track effort is more club-focused than their earlier work, surging between serene minimalism and slo-mo 4×4 beats. Their knotty assemblages of all manner of instruments are still present but eventually these give way to irresistible groove. Reflecting on their techniques behind the sound, they compiled five tips for our Artist Tips series.

“You don’t need to have studied an instrument when you can record any sound it makes and mess with the recording later.”

Catch the magic of the beginning

It’s important for us to regularly try out new methods, new approaches, and new equipment. We’re always trying to incorporate new things into our music because this keeps the ears aware, the brain alive, and it guarantees that we won’t be repeating ourselves too often. It’s really inspiring when you’re laying your hands on a new machine or instrument for the first time, and it’s very likely that a sound will come out that is completely fresh to your ears. So you should not allow those moments to pass without making anything from them. So whatever it is, a new synth, an effects unit, or a new way of preparing the piano, we make sure to hit record before we try it out.

For our new album Echo, we did large parts of the recording not in our own but at the Red Bull Studio Berlin. Christian Prommer is head of the studio there and he provided us with lots of new synthesizers, including the Nord Lead 2. We have always used a lot of Nord synths, like the Nord Wave and the Nord Drum, but this particular one was new to us, even though it’s quite old. Most of the string parts on the album and especially on the song “Decades” all started on this synth. It has this dry but rich sound, and this made us play more notes than we usually would because it  somehow felt like more space had to be filled. A sound you’re unprepared for simply makes you play differently. So this is a simple and great recipe whenever you want to expand your style.

Something we do a lot is combine two or even more completely different song ideas into one. This can either be done on purpose, like wanting to include a certain identifiable element from another project, or rather blindly, like seeing what happens when we combine two completely different jams without even thinking about what it’s going to sound like. Enforcing good coincidences—they are obviously not good every time—is often useful, not only when you are creatively stuck within a song.

To do this, record some patterns and ideas, then leave them aside and create a whole new session, not thinking about the first one. Afterwards, try and combine the two into one, and the result often brings something fresh. It might create a mess at first but once you mute some parts you’ll often end up with something interesting that you otherwise wouldn’t have thought of. We use Ableton Live as our main recording device so it’s easy for us to combine two projects into one, even if they’re originally played at different tempos or based on different harmonics.

Most of the time though we don’t deliberately start two sessions after each other to combine them. Actually, we just start lots of sessions and work on each of them until we feel like moving to another song. At some point we sometimes realize that something is missing within a song, like a second part or some elements that counterbalance what’s there already and this is most of the time the moment we still have one of the other sessions in mind and just add those. On the song “Mont Blanc,” for instance, we had the main theme in one project and the kind of acid-techno-trippy part was a whole different project. Neither works alone but together they make sense.

Record audio instead of MIDI; capture the moment

We mainly use the computer to record audio. Although we cannot avoid it completely, we’re not fans of programming MIDI and clicking on plugin interfaces that look like some old gear. And for the initial inspiration, we think it is actually better to avoid looking at a screen at all. Just being in a room with loud sound, and everyone from the band and even some friends, is definitely still the best way for us to make music.

We all like to play on synths and keyboards, drum machines, samplers, and acoustic instruments. You don’t need to have studied an instrument when you can record any sound it makes and mess with the recording later. The stuff that one does subconsciously, that just “comes out” when you play a pattern for a while and start to do variations, is often the most precious bit. You would have never come up with it when you were programming it because you never knew that you wanted to do it.

For example, one of our first tracks ever, “Mi Corazon,” happened like this: we sampled the plucked strings of our old detuned piano and loaded them into the Nord Wave keyboard. It felt fresh and weird to play this detuned plucked sound on a clean keyboard, and the first few notes we played just became the main theme. We were so surprised and pleased with the sound that we repeated the first few notes we played, and the others in the room were feeling it after they heard it a couple of times. In this case, someone turned the select knob to some bass sound, while the other one was still playing the same theme, and we simply kept that as the bassline too. This kind of thing can be so easy: just hit record before you even play the first note. Because when you want to repeat it, it often doesn’t happen again.

Polyrhythms (i.e a rhythm which makes use of two or more different rhythms simultaneously) are amazing. When you have two or more elements shift rhythmically against each other, you can feel like someone watching the waves or the leaves of a tree: it’s the same material but with ever-changing constellations. Depending on the polyrhythmic structure you create, it can sometimes take forever until the elements are meeting up at the same point again within the song.

We mostly start a song with two polyrhythmic percussive elements which can be played on percussion or the piano in some way, and then we add more elements on top. This basic polyrhythmic pattern will deliver many different versions by itself. So maybe you’ll end up finding that the way the elements come together in bar 11 or 27 is so good that I want to loop just that bar. So you might make a one-bar loop track, but the method that allowed you to find that special groove was polyrhythmic.

It feels a little bit like a random generator without actually being random. It’s also interesting to shift the volume of polyrhythmic elements between background and foreground, from smooth to disturbing kind of.

You can hear this with the marimba in “Masse,” the percussion in “Bop,” or the piano in “Paparazzi.”

Often, after recording synth parts in the beginning, we replace the good ones with other instruments, like strings, brass, harp, percussion, or piano. We’re usually aiming for a dynamic, breathing, irregular—or simply acoustic—sound, which those instruments bring naturally, whereas it would take more work to make the synthetized sounds feel as dynamic and interesting. There will also likely be some synthetic sounds that will sound too special to our ears to get rid of them, so then we would keep them and probably mix them with the newly recorded acoustic instruments. To us this is a very thankful instrumentation method, as it’s able to bring beautiful surprises, in which the mix of the two sounds like a third quality, hiding its components in a way.

For the instruments we don’t play ourselves, we invite musicians from our ensemble and ask them to interpret our ideas in several ways. Always ask a musician you trust for his/her special sound ideas and tricks, and you’ll receive gifts you’d never thought of. Our percussionist Matthias Engler is the type who always checks out new instruments, buys rare percussion in other countries, or collects things in nature or somewhere else. On “Chamber I,” for example, he circled a wooden fish on a string several meters long above his head, and it made that stroboscopic bassy sound. So basically when you sit in front of your computer for days, remember that you might also ask friends to bring in what they have.

Echo is available now, with a stream available via Youtube Music here.