The pair of Parisian powerhouses team up to inaugurate the Rex Club's new label. 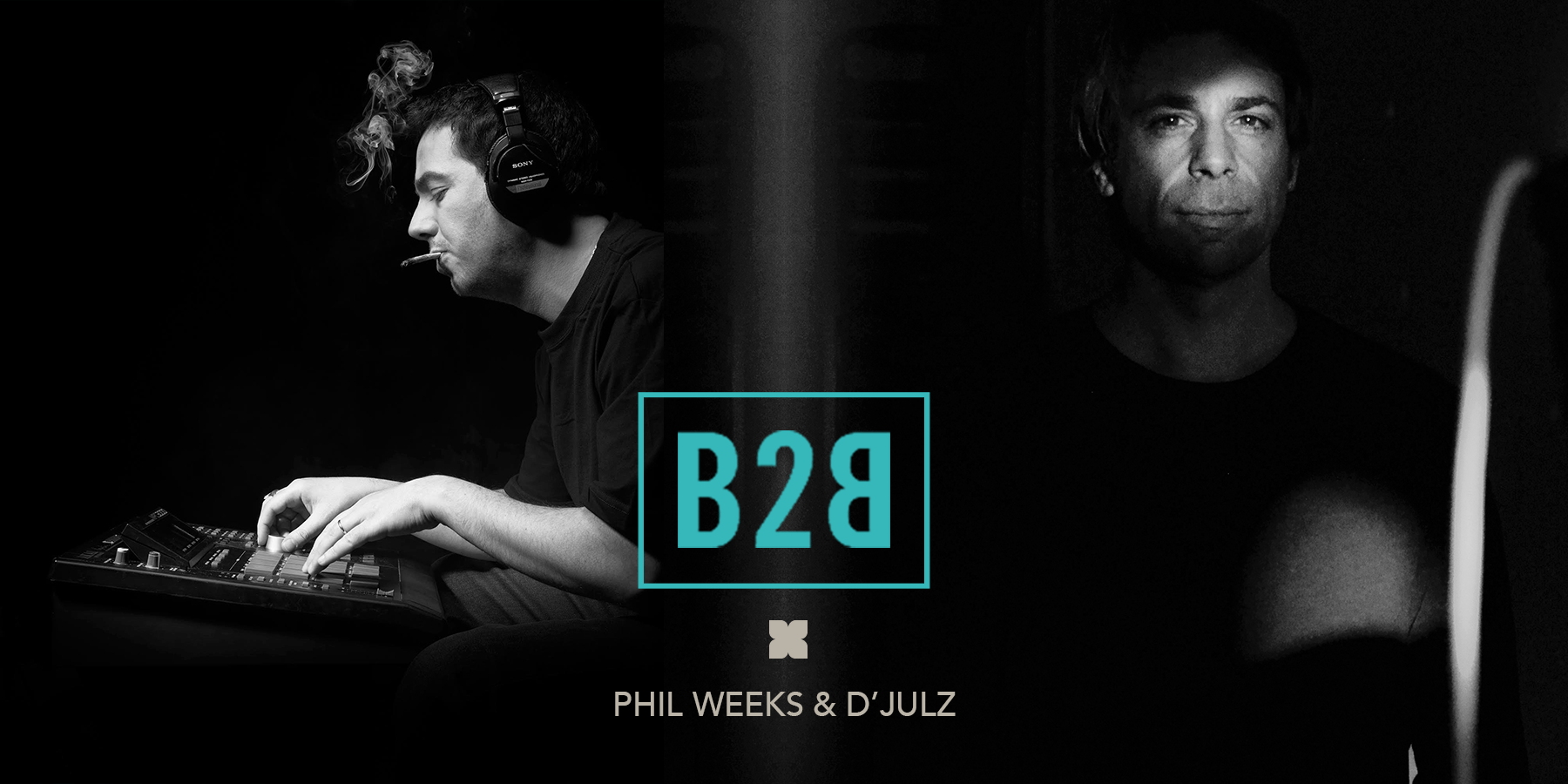 The pair of Parisian powerhouses team up to inaugurate the Rex Club's new label.

London’s Fabric launched its eponymous label in 2001, a mere two years the famed club began packing its three rooms with the U.K. capital’s discerning revelers; Berghain opened its doors in 2004, and its associated label, Ostgut Ton, began releasing the kind of rarefied techno that defines the Berlin nitery in 2006. But the Rex Club decided to let things simmer a little longer: The Parisian boîte originally began packing ’em in during the late ’80s, becoming a haven for the city’s electronic sounds in the early ’90s—but it wasn’t until last month that Rex Club Music burst finally upon the scene. But the two-decade-plus wait was worth it, as the label has sprung to life with a near-literal bang, tapping a pair of the club’s top residents—Julien “D’Julz” Veniel and Phil Weeks—to kick things off by combining their considerable talents for the inaugural single. As you might be able to guess, the result, the Second Hand Smoke EP (released last month), is a monster of an EP, with the “Break 4 Love“–referencing “Ligne B” (complete with tough Trus’me remix) backed with the hard-charging, evocative “2 Miles Away.” Hooking up via Skype, the two French vets discussed the new label, the making of the EP, the burgeoning Paris scene and, of course, the beloved club they call home.

D’Julz, you’ve been involved with Rex Club almost since the beginning, right?

D’Julz: Not the beginning, but almost forever. I think the first time I played there was around ’95 or ’96, for a party called Temple that some rave promoters had moved to the club. At that time, it was becoming very hard to do raves, because the police were shutting them all down—and the Rex was one of the only clubs that thought that it would be interesting to work with these new promoters and this new crowd. The club gave all the Saturdays to Temple, and I had one night a month with them. After a year or two, the promoters had moved on to something else and the night was done, but the Rex decided to give the DJs their own nights. And that’s how Bass Culture was born in 1997.

And that party still lives on—that’s quite a run.

D’Julz: Yes, it is! It was a monthly for the first four years, but then I started playing abroad more and more, so I changed it to every other month. It’s still doing great…and I still love doing it.

Would it be fair to say that both you and Bass Culture helped to define the direction of the club in those day?
D’Julz: Oh, I don’t know about that. There have been so many local artists who have been doing great nights there—starting, of course, with Laurent Garnier. He was there a few years before I started. The thing that did happen was that, in the very early days, the Rex had rock nights and hip-hop nights, and after a while, it was only electronic music. But it had all the electronic styles—there were big drum & bass nights, and Fridays were always big techno nights. And Phil’s nights were centered more around Chicago house; he can tell you more about that.

Weeks: Julien started way before me—I think the Rex is now totally associated with him and his night. I can remember going to his nights just to dance. He’s really been there since the beginning of our time—of Paris time. For me, it was different. I didn’t start playing there till 2001. It was not my night, but it was the first time I got booked at the club. It was something that I been waiting for, of course—everyone was like, “You have to play at the Rex Club!” We had that old mixer—do you remember that, Julien?

D’Julz: Yeah! It was of French mixer—a really nice one, but one that I never saw outside of France.

Weeks: I was only playing once in a while at first, maybe only once a year. I got my own night, and started getting more involved with the club, in 2008 or 2009. It’s the night I still do with my partner, Didier Allyne. He’s more on the techno side than I am, but we are good friends in live, so we decided to join up.

And now, finally, there’s a label, Rex Club Music.
D’Julz: Yes, finally! It’s Molly’s project—she’s an up-and-coming French talent who has been working at the Rex Club for many years, first doing promotions and later doing he own nights there. The boss of the Rex decided it was about time to start a label, and we’re all really happy that she’s the one who did it—she has a wide range in taste.

The club itself features a fairly wide swathe of music, so it will probably be difficult for the label to fully represent what the club is about.

D’Julz: Yes, that is true. The first release is house, of course, but the label has to show more than house. At some point, there will be techno and other things, for sure. But she is the right person to do it. She’ll be getting a lot of people who are residents of the club, and also guests from all over the world—and she wanted to start with something from me, which is great. But when she asked me if I had any new music, I said no! [laughs] That’s happened to be just when I started working with Phil on a project, and we didn’t know what to do with the project. We weren’t even sure if we were going to use our own names—the only thing we knew was that we didn’t want to put it out on our own labels. When we knew about the label, we realized it would be perfect, so we told Molly that we have this project, and if she likes it, maybe it would be perfect for the first release. She liked the tracks…and there you go!

Had you two worked in the studio together before this project?
Weeks: That was the first time, even though we’ve known each other since late ’90s. It was my idea to do this. Julien was sending me some music, and I was impressed by the sound quality, which is very important to me—everything always sounds so digital. So I was like, “Shit, man—we should make some music together!”

It’s kind of amazing that it never happened before.

Weeks: Yeah. We’re both at the club, I appreciate his work, he’s always playing my music—finally it was, okay, let’s do it! That’s how it started. Then Molly called while we were in the studio, and said “I would like something from you and Julien!” She already knew from you that we were working together, no?

D’Julz: Yeah, she did know. But it was perfect timing, really.

How did you two actually work—were you in the studio together for this, or were you sending files back and forth?

D’Julz: We were working in Phil’s studio—and Phil definitely has his own way of working. I usually use a mix of analog hardware and the computer—depending on the project, it might be more with synths, or it might be more with Ableton, but it’s a mix. Phil has his own way of working, which is almost 100 percent in the MPC3000, with just a couple of other things like the 909. Writing everything in the MPC is quite unique and makes things sound very special, and I was very curious to work this way. I just brought a couple of records to sample, and after that, it was just basically us jamming.

Do you think the results mesh your two sounds together, or does it sound like neither of you?

D’Julz: We finished the first track, “2 Miles Away,” really quickly, and I think that one sound different than what either one of us would sound like on our own. That was actually what we were aiming for.

Weeks: I would never have done that track by myself, for sure. It’s us working together, but it doesn’t sound like us, I don’t think.

D’Julz: But the second one, “Ligne B,” the sound of us together. The bass and beats are definitely Phil’s style—and the loop on top is maybe me. It’s the perfect combination of the both of us, and I think the EP is quite rich because of this.

Weeks: I feel exactly the same. That second track, the one with the bass, is the one that I’m playing the most in my sets.

D’Julz: Me, too! [laughs] But a lot of people have been playing the first one, so we are happy.

I know a lot of people really love that Trus’me mix of “Ligne B” as well.

D’Julz: We actually had a few names in mind for the remix, but I’ve really been liking what Trus’me’s been doing lately. It’s a bit more techno, but always with a nice groove. There’s something quite different about his music, and I really like that. Anyway, we submitted his name and a few others to Molly, and she knows Trus’me quite well and bumped into him when he was playing at Concrete a few months ago, and it just went from there. He did a great job—it’s stripped down and more focused on the bass.

Do you two have any more plans to work together?

Weeks: We haven’t even talked about that yet, I don’t think. Are we, Julien?

D’Jules: We had a lot of fun working together, and we are both happy with the result. But right now, I really need to start focusing on my own material, because I was doing a lot of collaborations before. I know Phil is a workaholic—he does like two tracks a day or something—but I’m a lot slower, so that’s why I have to set time aside to work on my own stuff. Eventually, I’d love to do something else with Phil.

Weeks: And I’m working on my next album, so at the moment I’m focused on that. I’m not even doing very much remix work right now. But we’ll do something again, for sure.

Do you both see yourself staying at the Rex Club for as long as you’re DJing?

D’Julz: Well, both of our nights have never been doing as well as they are now, I have to say. The Paris scene in general has exploded in the past three years.

Weeks: I think it is the best in the world now. Before, I would have said London and Berlin—but I think Paris is taking over, at least in Europe.

D’Julz: And that’s something that we did not see coming! But it’s at another level right now, with new clubs, new parties and new festivals. With the Rex in the middle of this, you might think it might suffer from having all this new competition—but that’s not the case at all. The club is doing better than ever, and so there is no plan to ever move on.

Weeks: I am the same way. It’s so funny—when I’m playing there now, there are all these kids looking at the CDJ trying to see what you are playing. They all want the music! People aren’t there just to party and get fucked up. They really want to know about the music, and you can feel that. And Paris wasn’t always like that.

D’Julz: This new generation is just fantastic. They are very open-minded, and they are very educated about things. They are the best crowd that you can imagine.