Hi, Doctor Nick! – Finishing Your Tracks and the Evolving Role of the Producer 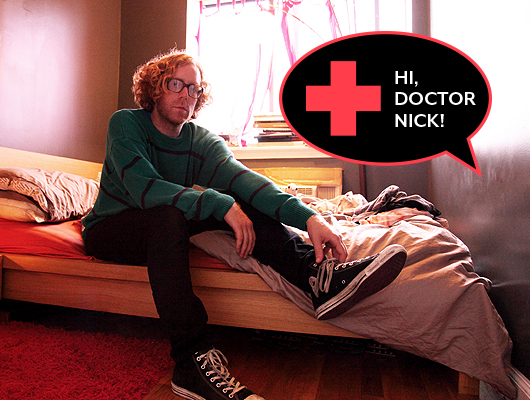 Hi, Doctor Nick! – Finishing Your Tracks and the Evolving Role of the Producer

It’s Thursday, which means it’s time again for everyone’s favorite globe-trotting guru, Nick Hook, to do his thing and pluck a few nuggets of wisdom from his psyche for the benefit of the XLR8R massive. By now, just about everyone knows that Doctor Nick isn’t an actual doctor, but the man sure does keep busy. Just a few days ago, he dropped a free EP, and even though he’s been on his grind spreading the world, he still found the time to answer a couple of questions. Read on, and see his thoughts on how best to finish tracks and the role of the producer in 2012. And of course, those with questions of their own should always feel free to drop him a line at doctornick@xlr8r.com.

Hi Doctor Nick,
I make music nearly every day using Ableton and some analog instruments. However, I can never seem to get a track finished. Most of the time, I get stuck in an eight-bar groove. It seems great at first, but then I quickly lose interest after repeated listening. Any ideas how to move things along and get tracks finished? Is this just procrastination or am I missing something more fundamental? How do you go about the writing/recording process?
Ingy

Have you thought about working with someone else? It could be someone you pay to engineer your sessions, or a collaborator that you could either pay in songwriting credits or by name. For me, I know that I’m not a true solo artist. I grew up in bands, so I get a much higher rush working with people. When you get stuck, they can man the ship. It’s like, drinking alone is kinda cool, but drinking with all your friends is way cooler.

Two of my best production contributions were showing YouTube videos of turtles fucking and John Legend getting a boner onstage. It gets lonely in the studio. Some good energy can become kinetic and that’s when things happen. If that’s not an option, try finding a couple of friends whose opinion you value that can give you constructive feedback. Showing songs in a demo state is extremely difficult sometimes, but just one little suggestion can help so much.

As for my process. Hmmmmm… I wish it was always the same. It just depends what I’m doing and who I’m with. My favorite way to work is to come up with a part or parts, and to bring it into whatever situation so we can make it better. I know my weaknesses too, and I think that is the best way to decide who to work with. I don’t think you are procrastinating, you are probably just really good at certain stuff. Unfortunately, in 2012, we are told that we HAVE to know how to do everything. Back in the day, there was a producer, an engineer, an assistant engineer, an arranger, and now, we’re supposed to be all of those.

Hi Doctor Nick,
What’s your general take on the role of the music producer today? It used to be that there were different and important jobs in the recording studio, each with its own skill set, and now, it seems as though the producer is expected to have all of those skills. I’m wondering what’s better in your opinion: to specialize in one part of the process and hand off your work to the next guy/gal, or to be a jack-of-all-trades, master of none (or one, or some).
Patrick

I think the overall role of the producer is to bring the best out of the person you are working with. To me, that means first understanding the person I’m working with—what sounds make them feel things, what they want me to do, how I speak to them, how I let them get their best work done. Sometimes, it’s chilling in the far corner of the room and letting them do their thing, but also paying attention and leading them to where we need to get to. Other times, it’s programming ALL the drums or playing synths. I look at it as trying to be the ultimate teammate. That means suggesting ideas, and not taking it personal if they don’t like them. If I make you 1% better and you are killing the rest of the 99% and that’s all you need me for, it’s all good. If it’s 50-50, all good. If it’s me 99% and you 1%, all good. The roles switch so fucking fast, and it’s all about knowing how to adapt to them. I’ve slowly learned that every project is so different, and that’s why I love it so much. Recording is such an intimate process, and helping people stay focused and comfortable is really important.

I kinda feel like I suck at everything, but maybe tricked people or something. I’m not sure. There’s no right or wrong really. We are just capturing energy and trying to make it come out of a speaker. To me, it’s also making a snapshot of where life was at that moment for me or my band or whomever I am working with.

The ego is the thing. Learn as much as you can—I am obsessed with trying to become the best I can at all aspects. But when I can’t do something, I feel like it’s my job to call someone in that can do it better or work together with them. I can play bass, mix records, and do all kinds of shit, but that doesn’t mean I have to. Working with females is so different than working with males and to learn how they each work, how to bring the best out of singers, it’s all so fun to me. I kinda equate it to sports in a way—all the parts are so integral. Maybe sometimes one person gets the glory, but if you know you were a part of it, big or small, you don’t give a fuck if people know or not. You can hold that close forever. With every song I have ever been a part of, I can almost go back exactly to the take it was recorded and remember the moment.

Sorry, the doctor is rambling this week. It’s been fucking nuts. The Brainfeeder dudes got me wasted as fuck on Tuesday night, my record came out, I got drunk at the Boiler Room watching dudes get stomped on, and this other dude was just telling me about working with Kraftwerk while fixing my speakers that I blew. That’s life I guess though, right?