Hi, Doctor Nick! – How to Get the Creative Flow Going and the Importance of Being on Time

It’s hard to imagine anyone having negative feelings about Nick Hook. Not only is the […] 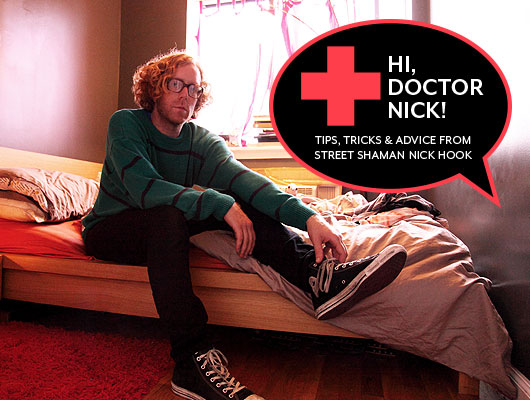 Hi, Doctor Nick! – How to Get the Creative Flow Going and the Importance of Being on Time

It’s hard to imagine anyone having negative feelings about Nick Hook. Not only is the […]

It’s hard to imagine anyone having negative feelings about Nick Hook. Not only is the guy brimming with positive energy, he also knows a whole lot about the music industry after years spent making music, touring with bands, DJing around the world, and producing records. Even better, he’s willing to share his knowledge, which is why we’ve enlisted him to stop by every Thursday morning and field questions from our readers. Want to get some answers from our resident advice columnist and street shaman? Drop him a line at doctornick@xlr8r.com.

What’s up y’all? I’m coming live and direct from LA. I’ve been having a good time here. I got some good sidework in with the gods of all gods, Salva and Thee Mike B. I’ve also been eating at my favorite Japanese restaurant in the universe, Daichan, and I had an amazing time playing music at The Do-Over. Life is okay.

Before we get into the column. I’d like to remind anyone and everyone of something. Whether you’ve put out a platinum record or you haven’t even finished your first demo, be respectful of people’s time. I could say it’s the single most important thing to be aware of in this game. Be on time. Always. It’s going to get you so much further than you could ever imagine, and if you aren’t gonna be on time, just tell someone, “Yo, I can’t make it. I’m gonna be (x amount) late.” No one wants to sit on their hands waiting for you for an hour when they could have been using that time wisely if you had just told them. People will respect you for that and more importantly, if they know you are punctual and easy to work with, you are going to be on their mind ahead of someone else who isn’t. You see the pros that come in on time and prepared and you are like, “Now I realize why you are making tons of money and have been in the game forever.” So yeah. Do that.

Without further ado, here’s this week column. Send questions and cool shit to me. doctornick@xlr8r.com. Also, I miss New York.

Hi Doctor Nick,
Could you shed some light on your workflow and process? Do you always write on the fly to keep things fresh or do you spend time bouncing out drums and melody ideas to audio to chop later?

What does the good doctor do when he’s having a tough time getting a vibe going? Do you spend time designing synth patches or trying out different engineering techniques? What do you find most useful for you?
Ethan

I don’t really do anything always. I’m not sure if that’s good or bad, but I guess that’s just how it is. I think that you should really just keep an open mind with things. I held a sample idea for two years that I always thought would be good and it ended up coming to life to start this track Doc Daneeka and I just made that’s gonna be dropped on Play It Down this month. I think it’s important to always have ideas circulating; you never know when one of them will spark something bigger.

These two questions go hand in hand for me, because I think a lot of the process of getting a vibe going is experimenting and learning. Going through some Max for Live stuff may spark a new rhythm. So could experimenting with a new effect or plug-in. Trying to recreate other people’s music can be amazing because you will take influence from something, but hopefully you will also put your own twist on it and make something new, or at least new for you. I can look back at some of the music I’ve written and remember exactly what I was trying to learn at the time I made it. There was always that cross section where I went, “Oh wow, that can go into this other idea,” and at that moment, I left the learning process and entered into a songwriting process.

Keep experimenting. Layer drums, process things through other things, put your synth MIDI into the drum MIDI, experiment with all the ASDR in your synth—there are so many options to get flow going.

Most importantly for me, when I’m not feeling it, I just listen to music. Sometimes I’ll put a record on, clean the studio, and listen. Try to just feel things. I’ve really been trying to take in different eras of music, and think about the process of how different songs were created, and how that relates to 2013. Obviously it’s different, but it’s cool to think about.

Go to a museum. Read a book. Try and take some influence from some new things. Maybe stepping away is the real key that’s going to spark some new fire.