Own the Dance: Deep in the Warehouse

The second piece in our new collaborative series with The Willow Tree looks at Frankie Knuckles and The Warehouse from 1976 to 1987. 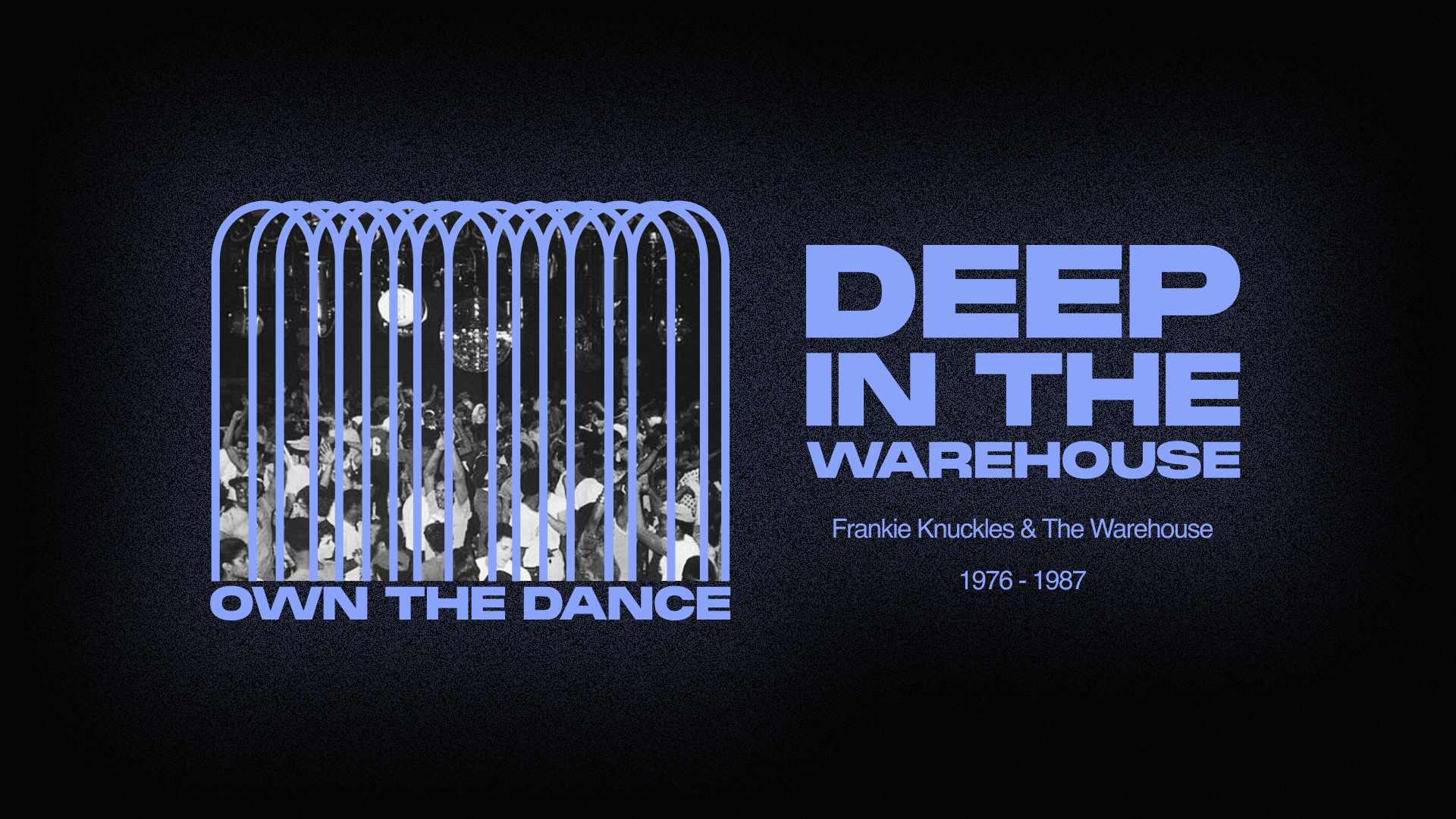 Own the Dance: Deep in the Warehouse

The second piece in our new collaborative series with The Willow Tree looks at Frankie Knuckles and The Warehouse from 1976 to 1987.

‘Own the Dance’ is an editorial series (you can read part one here) in collaboration with The Willow Tree, a DAO and Web3 community with the goal of owning and operating a global network of events, nightclubs, and venues. The series will highlight the communities responsible for inciting the most profound changes across dance-music history.

Spearheaded by coalitions of rock music fans and radio DJ Steve Dahl in the late 1970s, the “Disco Sucks” phenomenon was an ugly one. It all culminated on July 12, 1979, when the Disco Demolition Night took place at a baseball game in Chicago. Thousands of disco records were burned in the stadium after the game, greatly resembling the Nazi book burnings. Although disco’s popularity was already beginning to decline, this event hastened the process of removing disco from the American cultural landscape.

Ironically though, Chicago was one of the few cities in the US where disco didn’t die. Disco music kept playing at the clubs and on the radio, but with a lack of new material to work with, DJs reached for any records that could fill the void. Genres like European synth-pop and italo-disco temporarily filled the airwaves, and eventually, early Detroit techno tracks started making their way through as well.

In light of disco’s absence, DJs began reworking existing tracks and developing new tricks. Among these were “cut ’n’ mix” techniques, new transition techniques, and the addition of drum machines into mixing setups. These advances started taking place in South Side Chicago members-only gay club The Warehouse, where resident DJ Frankie Knuckles was pioneering the new sound. House, which initially referred to the music that could be heard at The Warehouse, was not yet a clearly defined genre, but rather a new DJ culture.

Although New York garage pioneer Larry Levan was actually The Warehouse owner, Robert Williams’ first choice for resident DJ, Knuckles, can be credited with having imported the new DJ culture to Chicago’s Warehouse. Knuckles took what he had learned from playing alongside Larry Levan at the Continental Baths in New York, where the two DJs had already pushed the boundaries of what a DJ set could be. Once in Chicago, Knuckles let his creativity run even more freely and took the role of a DJ to new heights.

Robert Williams was the man responsible for opening Chicago’s first after-hours clubs, and forever changing the course of electronic music. Born in Queens, New York, Williams attended law school at Columbia University where he became a habitual visitor of the bubbling New York scene. Eventually, the party got the best of Williams and he dropped out of University, later becoming an officer for the New York Department of Probations. It was in this line of work that Williams would first meet Larry Levan and Frankie Knuckles as mischievous teenagers. He would counsel the boys, up until one night when he bumped into both Levan and Knuckles at an after-hours spot called Tamberlane. After that encounter, the relationship dynamic between the three became that of equals and they would see eye to eye from then on.

Williams would eventually move to Chicago to be with his mother who had fallen sick. After arriving in the city he felt there was nothing going on. He found the scene to be juvenile, with promoters throwing “high school” type parties. So at the advice of David Mancuso himself, Williams opened a social club called US which was the first incarnation of The Warehouse. Sticking to his goal of creating high-quality events, he later opened The Warehouse on 206 Jefferson Street.

The Warehouse would attract around two thousand mainly Latin and African American gay people to party from Saturday night till Sunday afternoon. There was a four-dollar entrance fee to be let into the three-story former factory. They served free juice and water, which was allegedly spiked. The vibes were wild and the hedonism was plentiful. Stimulants and psychedelics were used openly and casual sex was commonplace. But the secret to Williams’ success was what was taking place on the middle-story dancefloor. In his booth at the center of the dancefloor, Knuckles was re-working and re-editing disco tracks on a reel-to-reel tape recorder over the best sound system in the city. With all the elements in place, Knuckles skillfully created an atmosphere that was unmatched in Chicago.

The Warehouse offered more to the Chicago natives than just a place to dance, The Warehouse was a safe place where aspects of rave culture were able to develop. Much like Mancuso’s Loft that we looked at in our last edition, The Warehouse offered shelter and community to gay people who were otherwise ostracised from masculine subjectivity, at least within the dominant discourse of culture at the time. Dance music in general has deeply intertwined history with gay culture together with the African diaspora and working-class communities due to their refused entry into this dominant discourse. Chicago house music was born at a junction between these groups as an act of cultural disobedience. The Warehouse members embraced music that the mainstream considered passé. In fact, as disco evolved into house music, house pioneers were honing in on the very aspects of disco that infuriated rock fans; synthetic sounds and the mechanic and metronomic repetition of the beat.

An identity politics formed at The Warehouse, revolving around a juxtaposition between finding/expressing yourself and losing yourself or losing control. The members of The Warehouse sought freedom through hedonism. They believed that by abandoning their own subjectivity and dissolving themselves into the crowd and the moment, liberation could be achieved through house music. It’s for this reason that many dancers and revelers, as well as Knuckles himself, referred to The Warehouse as a church. Ultimately, these tropes that were being cemented at The Warehouse can still be seen across dance music culture to this day.

In 1983, Knuckles ended up quitting his residency at The Warehouse after the promoters doubled the entrance fee. He started his own club called The Power Plant, and later the Powerhouse. In response to this, Robert Williams opened The Music Box. Competing in a healthy rivalry, these venues were equally as instrumental in the development of house music and its culture. The Music Box would put legendary DJ Ron Hardy on the map. He played in a much rawer style than others at the time, adding his own distinct strand of disorientating house to the Chicago scene. The vibe at the Music Box was rougher and harder than The Warehouse, the drug use and hedonism were more illicit. Hardy was no stranger to that hedonism and it ultimately led to his untimely death in 1992.

With regular parties popping up around the city, the competition between DJs grew. This propelled forward new innovations as more complicated mixing techniques were devised to keep ahead of the competition. Knuckles and Farley “Jackmaster” Funk were using drum machines to superimpose a four-to-the-floor kick drum over their disco mixes. This was the precursor to what we call house music and the relentless 4×4 kick became a defining sonic factor. Supposedly Knuckles actually bought his Roland TR-909 Rhythm Composer from Detroit legend Derrick May. Other defining sonic features of house would come about as more Chicago natives started producing to meet the demand for dance tracks in the wake of disco.

To really understand how house developed sonically we need to take a look at Giorgio Moroder with his Oasis Label and fellow Euro-disco producers. He made funk beats easier to dance to for white people by adding a 4×4 kick drum and was one of the first successful producers to create entirely electronic music. Moroder’s clearest influence on the early house producers was his collaboration with Donna Summer from the mid-’70s. Tracks like “Love to Love You Baby”, “I Feel Love,” and “Hot Stuff” were prototypes for the early Chicago scene. This tradition of experimenting with synths, exploring and learning the possibilities that electronics had to offer to music was crucial to the development of house and its trance-inducing aspects. One track I feel obliged to bring up at this junction is Italian producer Alexander Robotnik’s “Les Problemes D’Amour.” Released in 1983, it was a huge club hit in Chicago and was one of the first tracks to utilize a Roland TB-303.

It was Chicago-native businessman Larry Sherman who saw the commercial potential in house music. Sherman owned Chicago’s only vinyl pressing plant and took advantage of the new demand for house tracks. He started the Trax Records label in 1984, which debuted with “Wanna Dance/Certainly” by Le Noiz (a.k.a. Jesse Saunders). By the mid-’80s it was Trax and DJ International (another influential Chicago-based label) that created a distribution platform for house music, not only in Chicago but internationally. In September of 1986, DJ International’s release Love Can’t Turn Around would be the first of many house tracks to infiltrate the UK top ten, a few years before the first wave of rave in Europe. However, despite how big house music was about to become, Shermans’ role in the cultivation of house music is debated. Some view Sherman as the entrepreneur who legitimized house music and created the foundation for house producers to have a career; while others hold Sherman responsible for the Chicago scene’s premature end, due to his chasing of short-term profit and ignoring long-term career plans for his artists. Whatever your view of Sherman, without him house music may never have reached an audience outside of Chicago.

The genesis of house music would revolutionize dance music and rave culture forever. The tropes set in place by the Chicago scene would carry through and inform all mutations of rave music that would form in its wake. The importance of community and the quasi-religious belief that dance could lead to salvation, as well as the role and ability of the DJ being taken to the next level, were necessary advances to make rave culture as we know it.

At The Willow Tree, we as patrons and current participants of rave culture can learn a lot from our past. Williams and other Chicago house pioneers show us the importance of quality events and new innovations. Regardless of the scene’s untimely end, the noise they were making in Chicago would resonate more over the pond than it ever did in America. This led to the rave explosion of 1989, which saw electronic dance music blow up over Europe and eventually become a worldwide phenomenon. But in order to really understand the Rave explosion, we need to analyze another movement taking place in the nearby state of Michigan, which will be looked at in the next edition of Own the Dance.

You can find more about The Willow Tree and join the community via the Discord server here.