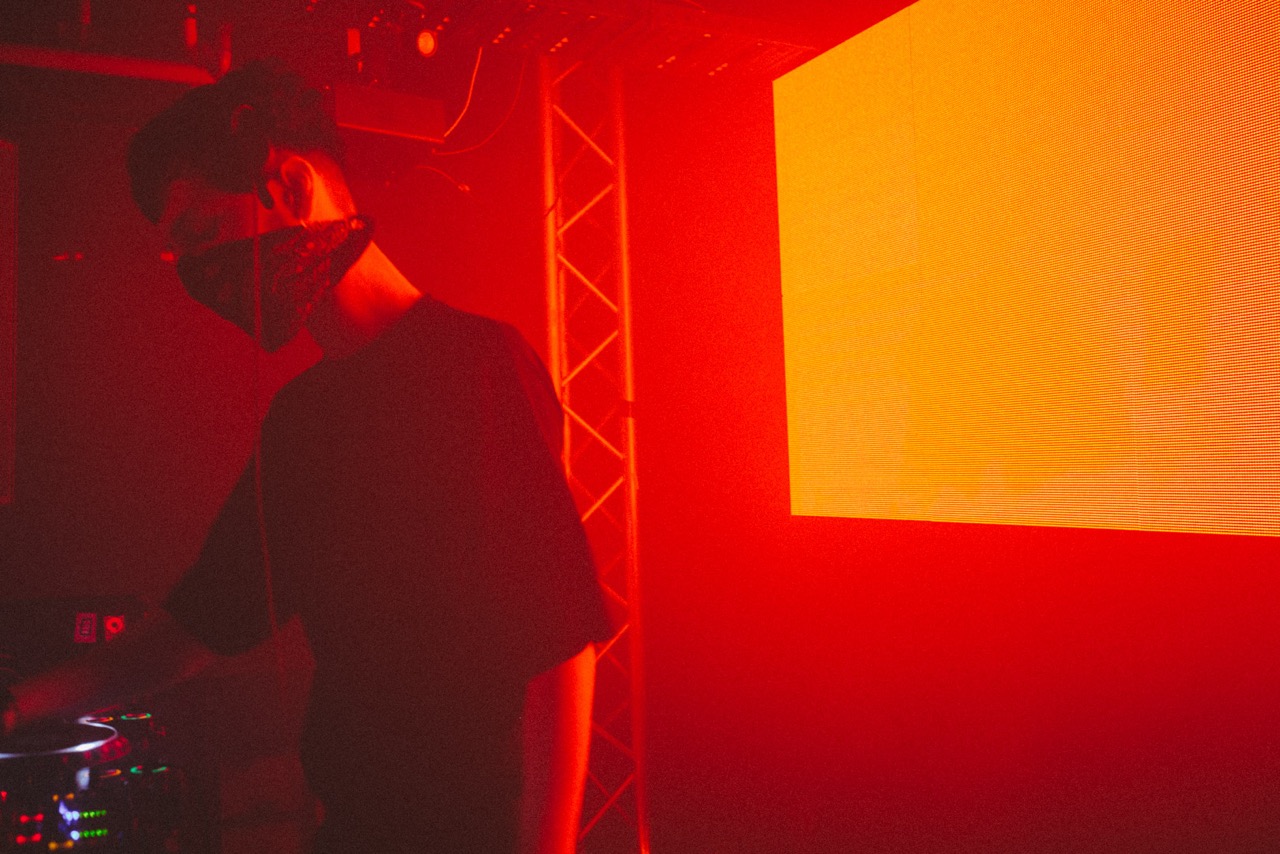 Guillaume Labadie found his way into music through middle school, first drawn into hip-hop, punk, and metal. An electronic remix EP of one of his favorite bands led him to explore more high-energy reworks of other metal and punk tracks, and set the blueprint for his work today. He wrapped up 2016 with a series of singles and EPs, showcasing a dark, driving, and at times aggressive sound, and an ability to effortlessly bridge acid, techno, trance, industrial, and ambient. More recent outings on Perc Trax, Monnom Black, and Rave Or Die, all typically intense and cold but not entirely cohesive, established Labadie as one of industrial techno’s most-talked-about artists with hundreds of thousands of online plays. He’s done this while maintaining anonymity, donning a bandana in his sets and almost entirely evading the media.

Today, Labadie returns with L’Âge Des Métamorphoses, his album debut. The 12 tracks are as expansive and widescreen as all that has come before, gliding between melodic, vocal, percussive, and acidic sections, keeping interest high without ever dropping into locked techno loops. In a rare exchange with the media, Labadie offered to explain the key pieces of gear behind it.

I dreamed about having a Prophet for years and I had to save a lot of money to buy one. It is the first expensive synth I bought.

This synth is so polyvalent. It can sound really soft and warm but also super metallic and crispy. I love it because I can do almost everything with it: pads, chords, sequences, leads, bassline. It can do all the typical vintage synth sounds, but it can also sound really modern.

On the opening track of the album, “The Beginning Of The End,” I wanted to create a big cinematic ambience, something like a synthwave-ish OST for a movie. So I mostly used the Prophet to create all the melodic parts, including the pads, the bassline, and the arpeggios. It creates this sort of ’80s music movie atmosphere. You can also hear the Prophet everywhere on “Eternity is Burning.” And if you are as into synthwave as I am, you’ll be in heaven.

This synth is polyphonic (six-voices), and the dreamy, emotional sound is perfect for me; I used it a lot through distortion pedals in order to create my pads on most of my early trance works. It’s the Rolls Royce of my studio.

A very powerful drum machine. Before having it, I had her little sister, the Xbase 09, but the 09 only has three voices (kick, snare, hats), which was not enough in the end. The 999 is basically like a TR-909 but I would say enhanced. It has plenty of controls the 909 doesn’t have, like the tune control on the high-hat part, for example. The kick, snare, and the toms are analog. The rest is working with samples (8bits!) and the VCA inside makes the whole machine sound really really fat.

I used the Jomox on mostly all my tracks where you can hear 909 hi-hats, 909 rides, etc. The Jomox also sounds great through a distortion pedal. You can hear it in my track “Demons From The Past,” released on ARTS in 2017, or in “Izanami,” released also on ARTS in 2018.

The Xbase 999 is really easy to sequence and sounds super ravey. And the Jomox kick is legendary. The only negative point is the multiple bugs the interface can sometimes have (encoders not working anymore etc.) which can be really frustrating. But last year Jomox released the Alpha Base, which is supposed to be like the 999 but even better.

I use them in all my tracks. I mostly use the Electro-Harmonix Hot Tubes (vintage version) on my drums and the Dreadbox Epsilon on my synths. Almost all the pedals I have work with vacuum tubes, which gives to the sound this gritty and punkish touch that I like so much. The big white processor you see in the picture is the Iotine Core 4, a three-layer analog saturator with 16 different saturation circuits. As there are other features like a three-band boost EQ, a ducker, a panner, and a stereo filter on it, it allows you to shape your sound with a formidable precision, which is impossible to get with a normal pedal.

In “Those Shinny Razor Blades,” I passed the kick and the hats of the Jomox Xbase 999 through the Iotine Core in order to create this kind of bassline that is constantly evolving.

This is the heart of the sound aesthetic of my album. I only got into the world of modular one year ago but since I got my first modules, my mind has been blown by the possibilities. I’m a big fan of Erica Synth, so almost all the modules I have are from them. A lot of them work with vacuum tubes too, which gives again this hot and crispy sound.

I used the Ericas a lot on L’Âge Des Métamorphoses as I wanted to get a particular aesthetic on the whole album: a gritty, sometimes a bit harsh, punk-ish sound.

My modules are also really cool for making drums, drones, and basslines. In “Sexual Tension” and “Fade Away,” I used the Erica modules to create these fuzzy, distorted basslines. You can hear similarities in the two tracks: the basslines sound super harsh and noisy, but with a lot of harmonics inside. But if you want to hear the perfect example of the sound you can get with vacuum tube modules, listen to “Impossible Love” and “Partner In Crimes,” because I did these two tracks completely with the modular system.

When I want to get extreme and dirty sounds, I use these little boxes. These synths are super great for harsh noise, drones, effects.

On the Trogotronic website, the description of the 669 is “From leviathan drones to intuitive blistering staccato attacks the 669cv Boss Hog’s breath of sonic application is extraordinary.” And it sounds exactly like this. I use them in order to do all my little noisy effects, like on “The Night Is Our Kingdom.” The brand is not as famous as Metasonix, but they have really strong products for all extreme sound lovers.

I have always liked to use my voice in my tracks. I’m a big fan of vocals because they can really add a more personal touch to your work.

My voice is on almost all the album tracks but in different ways. In “Crossing The Mirror,” “Romantic Psycho,” and “You Are Not Alone,” I used my voice to create singing vocals, so for a melodic goal. I looped them and used them as if there were synths. In this way, the vocals add chords, as if they were pads or leads, for example. In “Impossible Love,” “Sexual Tension,” and “Eternity Is Burning,” my voice is processed to death through reverb and overdrive. I’m more shouting than singing; it’s in order to create these punk-ish vocals. In “Partners In Crimes,” it’s more spoken-word style vocals, used sporadically on the track, but you can’t hear what I’m saying because of the maximum distortion.