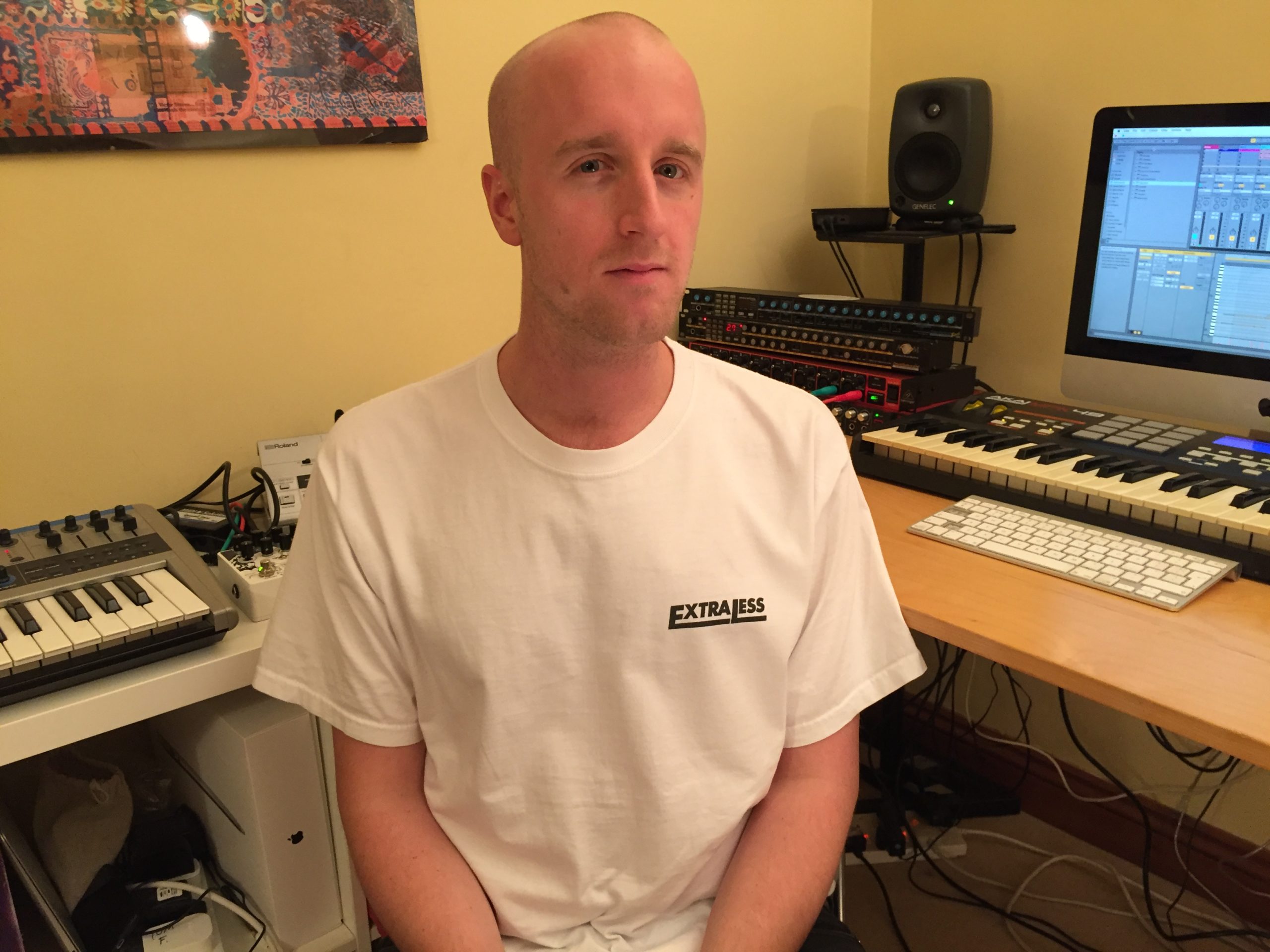 Alec Falconer is one of those electronic producers who operate in the shadows with a small but loyal following. The UK artist grew up in Kent, a county in south-east England, and involved himself with bands through school before moving to Newcastle for university where he learned the ropes of production: “I really struggled to find anyone who shared my passion for making music so I filled the gap in my life by learning to produce on Reason, learning to mix, and buying vinyl,” Falconer recalls. YouTube tutorials weren’t really what they are today, and so he owes a lot to Rob Amboule, whom he played in a band with, and, once he made the transition to Ableton, Harry Wills.

Falconer relocated to London at a time when many of the capital’s clubs were closing. He worked in a petrol station and then as an environmental lobbyist but quit to move to Paris to be with his then-girlfriend. The free time allowed him to focus more on his production, and he soon felt ready to share his music. Following an outing on Oval Distribution’s EXT series, he put out an EP on local label Rue De Plaisance called Flicker Zone, featuring four minimal-leaning UK cuts. Alongside Harry Wills and Rob Amboule, Falconer is also behind Phone Traxxx, an uptempo UK garage 12” series with three releases to its name.

Falconer now lives a “calm” life on his grandmother’s farm in Kent. He fills his days by digging in second-hand stores and making music, waking himself at 6am to experiment in his studio, and gigs on the weekend. “For me, the inspiration comes in a small niche of 10 minutes, and the rest of the track is just a matter of laying out the idea and filling in the blanks,” he says. “You can edit sounds and deal with the endless fiddling whenever you like, but you shouldn’t squander the moment where you’re able to hear the whole track in your head.” Earlier this year, he released Entity 005, a new 12” with a remix from Harry Wills, and there’s also been various bits on V/A compilations as Billy On The Buttons or The PGA, once again alongside Wills and Amboule.

Most recently, Falconer contributed a track to XLR8R+16 alongside Leif and Jack Michael. “Hospital Interview,” pairs a slick, driving bassline with an obscure vocal sample (hence the title), an electro beat, and some fluttering keys. In support of the release, available now to XLR8R+ subscribers, Falconer walked XLR8R through his studio setup.

This article will not be of interest to anyone who is into hardware. The total value of gear referenced here barely touches $1,000. Personally, I find a lot of hardware looks like exactly the thing I need to make a certain sound but in reality, it slows me down. I don’t have the patience to spend multiple days on a track, and spending time menu-diving while programming hardware just frustrates me!

In terms of future purchases, I am looking at buying the Vermona DRM MKIII and sequencing it via Ableton. The reason for this is that it has such a wide sound-palette which will complement the classic sounds of the DrumStation nicely. Likewise, I’m aware that I should replace my Novation K-Station (referenced below) with something that sounds a bit more serious and I’m probably looking at a Behringer Deepmind on that front.

XLR8R+ is a member-supported music community and subscription service championing independent music and culture—every member will get exclusive, unreleased music every month that you will not find anywhere else. Subscribe here now.

I know this is a cop-out as a first answer but it is the synth that I use the most, bar none. In order to make the sounds that I hear in my head, I turn to Operator. I don’t think I’ve ever used any other synth to make a sub, at least which ended up staying in the final version of the track! Likewise, when I want to mess about to make the glitchy sounds that keep your ears interested, then I use Operator and a bunch of Max for Live LFOs. It’s essentially a really simple version of modular synthesis for dullards such as myself. Almost everything is doable in Ableton. The rest just makes writing more enjoyable.

This should be essential for any studio, in my opinion. When you’re out digging in the cheap bins for vinyl, I’d say only five percent will actually be playable in a set, but maybe 20 percent will have something that is interesting or useful. I love making edits of tracks from the cheap bins and I’ve been using the turntable on more and more of my original productions. I started out by recording my own rewinds but now I do basic scratches that can be re-edited in Ableton to sound like someone with actual talent scratching! The technique is to take a few of your favorite samples cut from your own poor attempt at scratching, then assign them across the keys of your keyboard on your DAW sampler (maybe reverse a few?) and then set the pitch shift to +/–24. Record in MIDI, and it sounds like you’re scratching; quantize the midi: sounds like you’re Qbert!

I don’t have much preference on turntables but this one will play a record anywhere between 20 and 100rpm forward or backward, which is an interesting feature. Likewise, it is amplified within the turntable.

This is a free plug-in that was made for people to edit Sysex patches, as used in my tracks “DX7” and “Volca FM,” but you can run it directly through your DAW. Sysex patches are widely shared on the internet, and if you can take the time to browse then you will find some great stuff. I use a lot of organ sounds in my tracks and most of these now come from Dexed rather than the Korg M1. I don’t think I have any examples of alternative organ basses in released tracks but I think the keys in “Hospital Interview” are from Dexed. Anyway, have a fiddle; it’s an interesting free plug-in that is capable of lots of amazing ‘80s sounds!

Both of these are really cheap to buy and don’t take up much space. I’ve never really managed to get my head around any hardware sequencers but both of these guys sequence really nicely from Ableton, particularly the Drum Station with Ableton’s Groove Pool.

Lee Renacre (a.k.a 100Hz) sold me on the need for the Drum Station when he said, “It’s got both kicks!” (ie: 808 and 909), and I don’t regret the purchase at all. In the last couple of months, I’ve definitely got really into the swing of a laidback house groove from a combo of 808 and 909 sound, especially when they’re blended with a few organic drum samples.

The best example of this in a recent production is “Nine Bar Loop,” which is below. The sub is from the Bass Station. The pads and organs are taken from Dexed and resampled to death. I added the sound of some coins as a wink-and-a-nod to Pink Floyd’s “Money” which has to be one of the most famous examples of an unconventional meter (⅞) in pop music. Unconventional time signatures are (almost) impossible in dance music but you can get away with interesting loop lengths in terms of bars. This track really only mixes into very loopy and deep techno but the effect is relatively interesting and unique.

Likewise, I may just be imagining this but I love the combination of the Bass Station and Roland TB-03. You ping the two off each other in syncopation and the subtle differences in the character of the sound really work together. I used this a lot writing “Reflector Dub,” which will be coming out on 2XGREEN at the beginning of 2020.

I played in the United States for the first time this year and used the remaining dollars from my fee to buy this pedal which I had been lusting over from the excellent Youtube channel Knobs. It’s quite a crazy pedal and I’ve only just started working it into my tracks properly. You can modulate delay time and create all the weird twisting sounds that keep people coming back to delay pedals, but you can also send signal from your melodic and harmonic parts to the Reverb and the pedal creates an insanely warm wash of sound which can be recorded, resampled, and used as pads. I’ve used this in a few new tracks and I’m really pleased with the results.

It sounds like I’ve got a fetish for cheap Novation synths but the reality is that I’ve never splashed on more expensive gear. I have to shout this synth out since it is the one that I bought when I was 17 and I’ve never sold because it wouldn’t be worth it for the £100 I would get. For years, this synth gathered dust but each time I get it out and rediscover it I remember how much I like it. The layout is simple and the sounds can be diverse. In fact, almost everything that isn’t drums or the TB-03 on my Flicker Zone EP was made by messing about on this synth. Quite a lot of this was done with players because the decay fader was knocked off in a house-move!