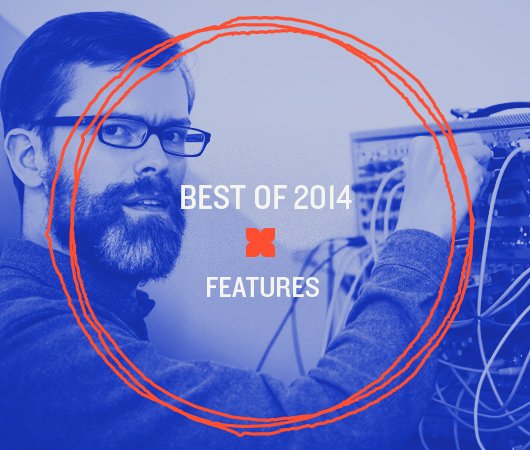 After kicking off our Best of 2014 coverage with a countdown of the most popular tracks from our Downloads section, we’re now ready to jump into second week of our year-end coverage, beginning with a look back at our Features. While things like news, streams, and free downloads make up the bulk of the posts on XLR8R, the Features section is where we get a chance to dig a little deeper, whether we’re interviewing artists or examining a larger scene or trend. It’s also a place where artists often get a chance to speak at length in their own words; sometimes, that takes shape in the form of production tips or studio advice; other times, they’re telling a story or sharing opinions about issues—both professional and personal—that they care about. And while many people subscribe to the narrative that the public no longer has an appetite for long-form articles, especially on the internet, the Features section continues to be home to much of XLR8R‘s most popular content. As such, we’ve gone back and selected our 10 favorite pieces from 2014, and just for good measure, we’ve also included a list of the year’s 10 most popular feature articles.

10. 20 Questions: FaltyDL Talks NYC Dance Crews, Tripping in Nature, and Motorcycle Gunslinging
The Brooklyn producer was happy to discuss his adopted hometown and latest LP, but he also shared stories of drug-induced teenage adventures and revealed a few of his unorthodox life goals.

9. Trainwreck: DJ Slugo Recounts the Time He Found Himself in the Middle of a Hotel Room Brawl
The Trainwreck series has been home to some pretty wild tales over the past few years, but DJ Slugo’s story about a late-night brawl with promoters might be the craziest thing we’ve ever published.

8. Rewind: Caribou
We asked Dan Snaith to trace back his own career, album by album, and provide some insight into how his music and artistic outlook have evolved over the years.

6. 20 Questions: Venetian Snares Talks Coffee, Cats, and the Power of Love
The Canadian producer has never been shy with his opinions, and this edition of 20 Questions found him expounding on his love-hate relationship with Winnipeg, how falling in love has changed his life, and much more.

5. LA Story: An In-Depth Look at the Rising Tide of House and Techno in the City of Angels
The underground house and techno scene in Los Angeles has undergone something of a resurgence in recent years, prompting us to explore the movement and speak with many of its key players.

4. Nothing Is True, Everything Is Permitted: Wolfgang Voigt, Lawrence English, and Others Ponder the State of Ambient Music
Although it remains difficult to precisely define, ambient was responsible for some of 2014’s finest music; over the summer, we spoke with a variety of artists about the current state of the genre and examined some of the cultural forces shaping its ongoing evolution.

3. Beats in Space: An Oral History
Tim Sweeney’s long-running radio show recently celebrated its 15th anniversary, which prompted us to go back and document the program’s history by interviewing a diverse cast of characters that have been involved with Beats in Space over the years.

2. In the Studio: Surgeon
The veteran UK producer is one of techno’s most respected names, and while’s he’s often been shy about revealing too much about his process to the press, he kindly let XLR8R into his studio and told us about his set-up and production approach.

1. Real Talk: DVS1 on Respect, Photography on the Dancefloor, and the Battle Between Art and Entertainment
Our Real Talk series of artist-penned essays has been one of the most popular new additions to XLR8R feature calendar this year, and DVS1 kicked things off in grand fashion with this lengthy and highly personal missive about what he sees as troubling trends in club culture.

2. Real Talk: DVS1 on Respect, Photography on the Dancefloor, and the Battle Between Art and Entertainment

3. In the Studio: Surgeon

5. Dekmantel 2014: 10 Reasons the Amsterdam Festival Was One of the Year’s Best

7. Artist Tips: Com Truise Shares Five Keys to Getting the Most Out of Your Productions